We are going through some cold weather in New Jersey.    While everybody has been complaining how cold it is, to me, it hasn’t seemed as bad as last year.   I have gone on a few walks, and it hasn’t been that bad.  Last year there were times when I could not feel my hands and face after a few minutes.

Stopping to say hi to the cows during my walk 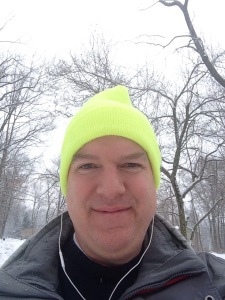 Me and my yellow hat

Couple of things happening this week.    Pitchers and Catchers are reporting to Spring Training.   Hopefully this will give the sports radio stations something new to talk about.   Was getting really tiers of worthless NFL and NBA talk.    When discussing baseball, at least it will be something new, and not mostly made up situations and rehashing of the same things over and over again

As for my New York Mets.   On paper they look to have the makings on a solid team this year.  They have some good pitching which should be able to keep them in games.   If there hitters simply put the ball in play, and put up some decent numbers, they should be a solid team.   I’m glad they didn’t go out and spend a ton of money of some mediocre free agents. They need to get off to a good start, and if they do, it should be a fun summer

Quick thought on teams like the Yankees having special days and retiring players numbers.  Good for them.   More team should take the Yankees lead and better honor their older players.   Instead of lashing out against the Yankees, teams should spend the energy embracing  and celebrating their own players more.   Sports is about the fans, the history and the memories.    I would love the Mets to retire numbers of players such as Darryl Strawberry or Dwight Gooden.   Would that be a knock on Tom Seaver.   Absolutely not.

Will be watching The Academy Awards on Sunday.  This will mark the 3rd straight Sunday with a Major Live event (The Grammys on CBS, and the SNL 40th Special on NBC).   While I am not a big award show fan (other than the Oscars) , and haven’t really watched SNL in years, both shows did garner my attention.   I enjoyed a lot of the Grammys and liked how they mixed up the older artists like ELO and Annie Lennox with newer artists. And while I like most all types and styles of music, I have to admit that I really do not like the Jay-Z / Beyonce / Kanye West music.   It just does nothing for me.  Overall I would give the Grammys a B.   I was disappointed with the SNL 40th show.   Think they got stuck between it being a Reunion Show or a Tribute show.   While I found some of the skits funny, and enjoyed a lot of the old clips, I wish they had found a way to better incorporate all of the returning cast members into the show rather than have them walk out, introduce something and then basically disappear.   There was a golden opportunity here to break out of the box and do something special, but they fell flat.  Overall I would give the SNL 40th Reunion show a D

Thats all for now