Finished watching Season 3 of “Designated Survivor” on Neflix and really enjoyed it. I was a big fan of the show when in was on broadcast TV (ABC) and am grateful to Netflix, as well as the cast and crew, for bring taking a risk and bringing the show back for Season 3.  While I’m not big fan of streaming episodes of a show in a short window (I actually like some time between episodes), this show was so well done that It got me hooked and I watched all 10 episodes of Season 3 in a little over 1 week.   With a great cast, playing great characters, the show was able to tackle a lot of hot button topics in a very realistic setting.  I always liked TV shows that made me have to think after each episode, and this season of Designated Survivor was one of the best at it.   Another great role for Kiefer Sutherland who is one of my favorite actors.   Looking forward for him and the rest of cast to return for Season 4 sometime in 2020

Recently saw that Adam Baldwin was at the Philadelphia Wizardworld convention and it immediately made me think of one of my all time favorite movies “My Bodyguard”   He played Ricky Linderman, a troubled teen who becomes friends with Clifford Peach (played by Chris Makepeace) a shy high school student.  The movie also stars Matt Dillon as Melvin Moody as the school bully.

Its one of the best teenage movies ever made and anybody who has not seen it should take some time to find it and watch it.    Its well acted, and a very touching and emotional portrayal of growing up a teenager in a new high school

One last thing. Cliffords friends in the movie (Carson) was played by actor Paul Quandt.  While he had a small role, he had some scenes that I still remember and can quote today just like it was 1980 (almost 40 years ago).  Looking at his IMDB Profile, My Bodyguard is the only movie he ever appeared in.  I did a little research and could not find any relevant information on where he might be these days (June 2019).

This is similar to Chris Barnes who played my all time favorite character Tanner Boyle in the first two Bad News Bears movies, and then after a few small roles, basically disappeared from show business

While I respect their decision and privacy, If anybody has any information on either one of these actors, or any suggestions on how to reach out to them, it would truly be appreciated.   I would love to just be able to tell them how their roles have remained with me all these years to thank them for making my life a bit more fulfilled 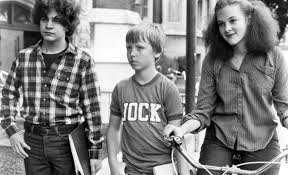