Been a bit busy lately, but was able to take a trip with a friend down to Atlanta to see Marillion play a gig on their current US Tour.  They are playing venuses that they have rarely played and skipping most major markets near me this time (NYC, Philadelphia, Boston).  I got lucky that one of the stops on the tour was the Variety Playhouse in Atlanta on a Saturday night.   Flight from Newark, NJ to Atlanta were very reasonable so I was able to fly down on Saturday, meet a friend for the show and fly back on Sunday.   Was a bit of a whirlwind, but worth the time and cost to be able to see Marillion play.   I have been a fan of the band since the early days and have continued to follow then throughout the years.    The area was really cool (Little 5 Points), with lots of restaurants and even a old time record store. 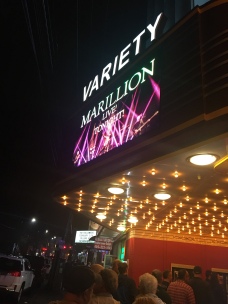 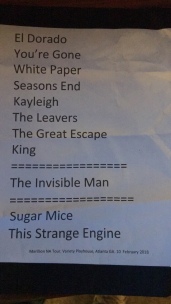 After the show, I was able to ask one of the tech guys for Pete Trewavas’s set list of the show and he was  nice enough to hand it to me.   A great silvanaire from the show.

I would highly recommend seeing Marillion if you get a chance.   They have a very loyal following,  and its really an experience to see.

Back next week with my thoughts on the Big 3 (Survivor,  The Amazing Race,  Big Brother) as some come to an end and others start up again

Also pitchers and catchers reported, and position players are reporting which means its baseball season.   Time to start looking through things as I have a few Roto Baseball Drafts to get prepared for.