A part of my childhood has left us today as Mr Spock (Leonard Nimoy) has passed away.  A very sad day for Star Trek fans as we say goodbye to one of the greats.   Will always have fond memories of watching Star Trek after school on WPIX 11, and the excitement of going to see each new Star Trek Films with friends.   Thank you for the memories

My Nimoy was also  very popular to Non-Sports card collectors,  signing cards for numerous Star Treks sets that have become highly sought after.

Her are a few of his signed cards  (Love the Dual Auto with William Shatner, and hope to own one some day) 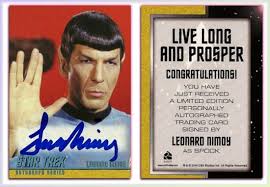 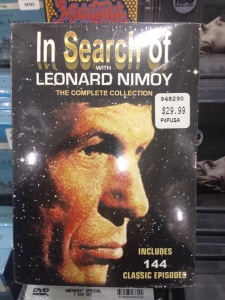 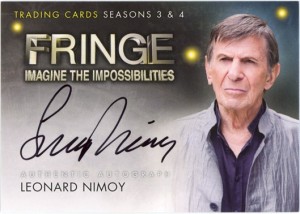 Live Long and Prosper Mr Nimoy.   You will be missed

An average guy living a great life in New Jersey.
View all posts by AverageAndy →
This entry was posted in Announcement, Star Trek and tagged Fringe, In Search Of, Leonard Nimoy, Non-Sports Cards, NonSportUpdate, Star Trek. Bookmark the permalink.